I had a friend recommend me to make a spongebob meme generator for some of the mocking shenaningans we engage in, in our discord chat.

Thought i'd give it a shot as it seemed like quite an easy task. Just creating text that each character alternatives between it's uppcase and lowercase.

Before I get into it, here's a simple demo of the end result:

So initially I came up with this very simple one liner.

For the purpose of explanation i'll expand this:

What it does is:

But me being that guy who strives for perfection, I noticed this still has some flaws, because all it does is simply alternate each character with its upper / lower case value.

For example it doesn't account for spaces, symbols or any other non alphabetic character, so it will technically attempt to upper / lower case any non alphabetic character too, which could result in the subsequent letter being the same case as the letter before a space. e.g the string hello world will result in HeLlO WoRlD or 1234 HELLO' WORLD resulting in 123 HeLlO' wOrLd

# So back to the drawing board..

I had several ideas of how to solve this.. but ultimately this is what I came up with:

A very simple task for almost no benefit, but very fun and a little bit more challenging than meets the eye.

If you've noticed any errors in this article, or have any suggestions for how I can improve this or make it better, feel free to dm me and let me know! "ThIs Is My FiRsT bLoG pOsT" 😩 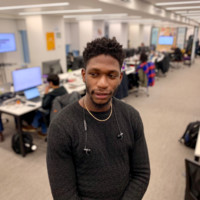